One would expect that on all islands, baby deer safely grow up into adulthood without much trouble, far away from warm-blooded carnassial danger. On islands, with their typically unbalanced faunas, large and medium-sized terrestrial carnivores are entirely missing. This creates a safe, perhaps even arcadian environment. Not so. We found for a fossil population of endemic deer (Candiacervus, Crete, Late Pleistocene) an unexpectedly high juvenile mortality, similar to that reported for extant mainland ruminants. Age profiles show that deer surviving past the fawn stage were relatively long-lived for ruminants, indicating that high juvenile mortality was not an expression of their living a "fast" life. The Sicilian dwarf elephant (Palaeoloxodon falconeri) was shown to have lived a "fast" life, which means a short life, lots of offspring of which many don't make it (Raia et al. 2003). This is not the case for Candiacervus. Juvenile mortality for Candiacervus was caused by diseases, accidents (Crete is mountaineous), starvation and so on, just as on the mainland or perhaps even more so. What does this message tell us? We think that precisely this high juvenile mortality acts as a great selective tool, permitting rapid adaptation to the new environment, and in the case of Candiacervus, radiation and speciation. Without this selective filtering, such processes likely could not take place so fast: 6 or 8 species in at most 125 thousand years. Read the article at
Posted by Alexandra van der Geer at 11:15 AM 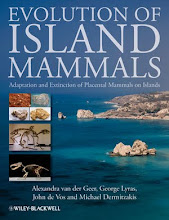 Dedicated to the memory of Paul Yves Sondaar (1934-2003). Richly illustrated textbook on fossil, subfossil and recently extinct insular mammals: their adaptation and extinction. Includes the history of discoveries. ISBN 978-1-4051-9009-1. Wiley-Blackwell, 2010. 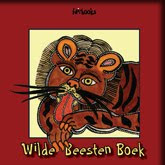 The art history of South Asia covers a time span of roughly four and a half thousand years. During this period, a vast number of animal stone sculptures has been produced, ranging from the pre-historic period till today and covering a great variety of motifs and imagery in different regions and religious traditions. Even so, the number of studies devoted to these animal sculptures has remained extremely limited. The present book aims at filling this knowledge gap. With this richly illustrated book, the first of its kind, Van der Geer offers a comparative study of the ways in which various animals have been depicted and a lucid analysis of the sculptors’ treatment of their “models”: living animals. The art history of sculptured animals is contextualized with a description of the use of animals as can be read from ancient texts, archaeological evidence and contemporaneous culture. In doing so, parallels as well as differences in style or iconography are highlighted, elucidating the variety of animal depictions across regions, religious contexts and through time. The corpus of discussed material ranges from Indus seals, stupa panels and railings, monumental temples from North and South India, non-religious palace and fort architecture to loose sculptures in museum collections.

Insular mammals and their adaption and evolution

Alexandra van der Geer
Interdisciplinary researcher with focus on palaeontology (extinct insular faunas), geomythology and palaeo-pathology. Other interests: the interface between wildlife and human culture and the early domestication of mammals.

Visit my homepage at http://users.uoa.gr/~geeraae. If you are interested in paleontology, evolutionary biology, paleopathology, Sanskrit or Sardinian, then you are at the right address. If you're more interested in particle tracing, electron beams and accelerators, visit http://www.pulsar.nl. If you'd like to see my ink drawings, visit http://svandergeer.blogspot.com . If none of these are what you seek, search Google.

The dwarf hominin of Flores compared with the microcephalic skull from Crete, discovered by Platon and brought to the fore by Henneberg and Thorne to prove that the hobbit was just pathological. They used only data from the literature, while we really measured and studied the skull 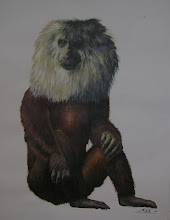 One of my study areas: the specimens of this papionin from Lesvos

Me with a Hoplitomeryx skull 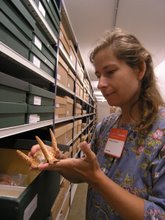 The five-horned deer of the Gargano, Italy (see my publications) 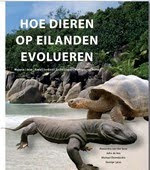 My publications (a selection, in chronological order) 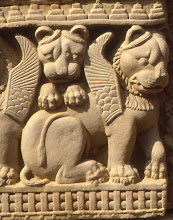 My other interest: Indian Art! Especially the depiction of animals in stone throughout the ages. Here a couple of fabulous winged lions. Phtotograph by Kamphorst.